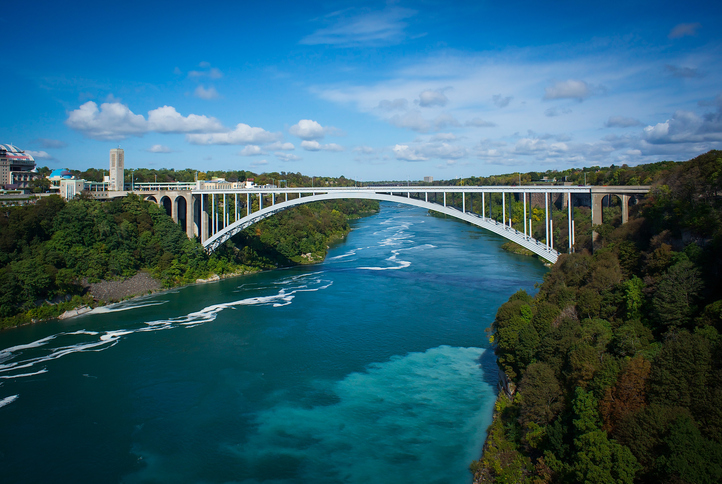 One cartoon image--(Rocky and Bullwinkle)-- of an unlikely train bridge is based on an astonishing real-life structure, the massive Steel Cantilever Bridge, which spans a gorge in Alaska near the Yukon border.

The Steel Cantilever Bridge was built as part of the White Pass and Yukon rail route. The route originally ran from the coast at Skagway, Alaska, north and east to Whitehorse, Yukon. The southeastern Alaskan coast has a connected line of deep fjords that provide ships protection from the open Pacific Ocean. The fjords are know as the Inside Passage. Skagway is located in the crook of mountains at the northern end of one of the fjords. Moving inland from the coast, the terrain dramatically rises up several thousand ft.

The Canadian government authorized construction of the narrow gauge railway to ease the way for prospectors. Unfortunately, the railroad ultimately did not provide much help. When gold was discovered to the west in Nome, Alaska, the Klondike Gold Rush petered out shortly after the railroad line was opened.

After that, the route provided support for mining operations. The railway was the primary route for shipping ore out of the Yukon to the port at Skagway.  During the period following World War II, the railroad's use for shipping was gradually reduced as mining decreased. It stopped running altogether in 1982.

The last and current chapter of the story focuses on tourism. The sheltered fjords of the Alaskan Inner Passage were discovered by the cruise industry, and in summer several large ships would set sail for ports along the Alaskan panhandle. The railroad line was refurbished from Skagway to the town of Carcross, Yukon, and reopened in 1986. (The segment from Carcross to Whitehorse is no longer used.)

Construction of the original line featured heroic feats. In those days there was no Autocad or smartphones, and use of engineered plans was limited.  Constructors lacked detailed survey, and they staked the route as they built it. One of the biggest challenges was crossing the canyon near the top of White Pass. The resulting bridge was a marvel of its time, with unique triangular trusses that join to form a three-hinged structure. Calculations were limited not so much by theory but by the difficult process of calculating. With a slide rule, you can only do so many finite element analyses (i.e., none). The original hand-drawn blueprints had stress tables for the truss members, and the analysis was governed by basic assumptions with no partial fixity or secondary moments.

The overall approach was simplified by detailing three hinges, two at the base and one in the middle. The bridge seems to connect at a sharp point in the middle, in part to make the analysis easier by forming a center hinge. The two sides are evaluated as two separate simple spans.

Without advanced analysis, nineteenth century bridge engineers relied on "form follows function." Back in the day, a bridge was detailed to get the forces from point A to point B with no muss or fuss. There was no ability to design "startle structures" with leaning pylons or gaps in arches. But the resulting bridge was dramatic and startling anyway.

The last train crossed in 1969. That year, the tracks were rerouted to a nearby tunnel and less ambitious girder bridge. Riding the train today, you can see the old truss bridge as the train crosses the gorge on the adjacent girder bridge. For a moment, it feels like you have been transported to a cartoon. The train pulls out of its tunnel, and there is the old bridge off to the side, an astonishing sight. Parts of the timber approach trestle have collapsed, but the main triangular trusses of the steel bridge are still in tact.