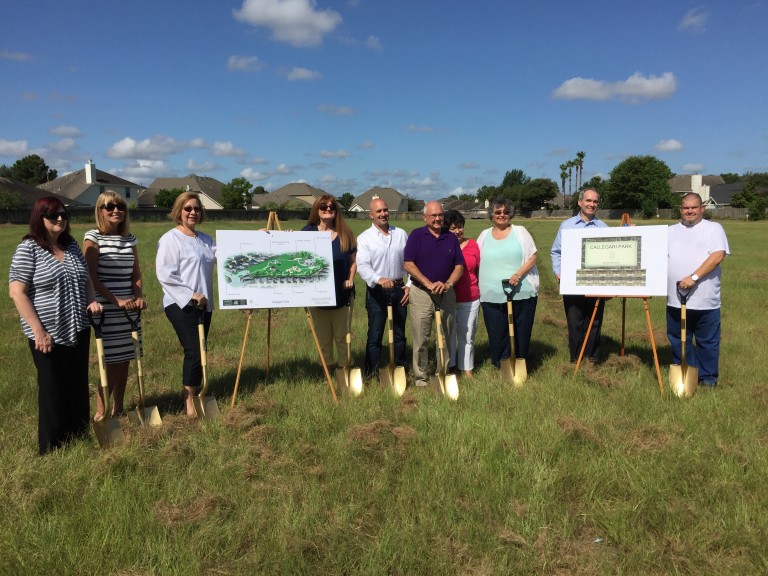 On Saturday, July 23rd, EHRA took part in the groundbreaking for a new park inside the Katy neighborhood of Lakeview, to be named Callegari Park, after former Texas State Representative William Anthony Callegari, Sr., known as Bill Callegari.

The event was hosted by Harris County M.U.D. 64. The new multi-use park will be approximately 3.5 acres and will boast multiple playgrounds, an educational butterfly garden, a pavilion, multiple fitness stations and .35 miles of concrete trail. The park will be accessible by a 17-space parking lot adjacent to Repiton Way.

EHRA is the district engineer for Harris County M.U.D. 64 and completed the site civil engineering for this project. In addition, EHRA worked with landscape architect Murr Incorporated Landscape Consultants on the new park. EHRA Senior Principal Jim Russ is also a long-time friend and colleague of Bill Callegari.

"I am incredibly flattered yet humble and appreciative that Harris County M.U.D. 64 felt my contributions were deserving of such an accolade,” commented Callegari, who was delighted to learn that EHRA, Jim Russ and Michael Murr were directly involved in the project. “Knowing these two companies and individuals are involved, I know this park will be one the community will be able to enjoy for years to come," he added.

Representative Bill Callegari represented the Katy area since his election to the Texas State House of Representatives in 2000. Mr. Callegari has passed several bills to eliminate unnecessary government functions, lower citizens’ tax burdens, and improve accountability until his retirement from office in 2014. Representative Callegari has worked on many water policies, eminent domain, transportation, low income housing reform, and government streamlining during his tenure in the House.

A Licensed Professional Engineer for over four decades, Callegari holds a Bachelor’s Degree in Agricultural Engineering from Louisiana State University and a Master’s Degree in Civil Engineering from the University of Houston. Callegari and his wife, Ann, have been happily married for more than 50 years and have four children and eleven grandchildren. He retired in January of 2015 and now enjoys life with his wife in the Katy area.