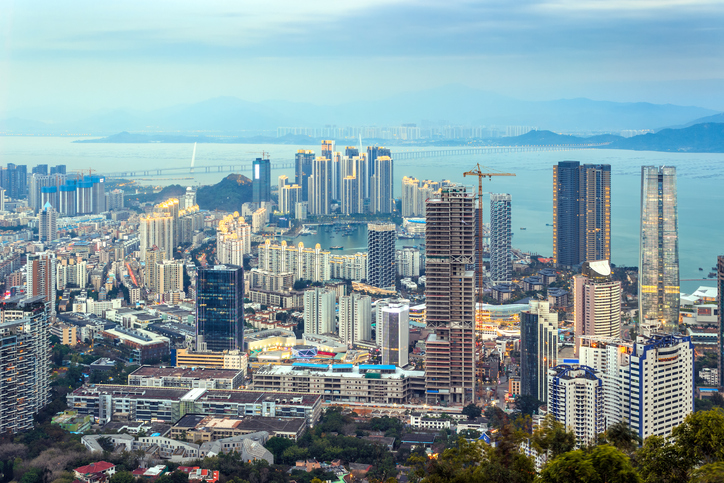 Catherine Brinkley is a professor of human and community development and human ecology at UC Davis. So it's interesting that in a recent published paper, she advocates that cities should work more like coral reefs -- supporting a diversity of niches and uses for sustained vigor and resilience. In ecology and medical sciences, the term for a physical form with such topographic complexity is rugosity.

Traditional urban planning favors "concentric" layouts with a downtown core surrounded by suburbs and farmland (right). But Catherine Brinkley argues instead that cities should plan for "rugosity" (left) with more interfaces between functions.

For two centuries, the guiding theory in urban development has held that cities need a dense central core with the low-density suburbs and farmlands circling around that center. This design is referred to as concentric.

Brinkley challenges that status quo in her article -- "High rugosity cities: The geographic, economic and regulator pathology of America's most non-concentric urban areas." The article was published in Land Use Policy this winter.

"Higher urban rugosity can be achieved by maximizing the urban interface through implementation of greenbelts, green wedges, and wildlife habitat corridors," she said in the article.

Brinkley cites examples such as Portland, Oregon; Copenhagen, Denmark; and to some extent, San Francisco. Even though San Francisco is a very compact city, it has Golden Gate Park in the middle. It breaks up urban space with green space, she said.

In her study, Brinkley looked at 483 urban areas in the United States that also had farmland and green space around them. Several of the places studied are dominated by large state or national parks, lakes, and water ways.

The only commonality among the top 30 high-rugosity counties she identified -- since they had dissimilar county, state or local planning governance structures -- is that they were under extreme pressure to both develop housing and have abundant productive farmland. Nearly a third of the counties in the top 30 had experienced high population growth in recent years.

Additionally, many of the counties with the highest-rugosity urban interfaces are in the top agricultural producing counties in the U.S..

The way high-rugosity counties achieved their status varied, according to the study:

Pasco County, Florida, which includes the Tampa-St. Petersburg area, can attribute much of its urban rugosity to environmental protection zones borne out of a county effort to preserve wildlife corridors.
Robertson County, in Tennessee (Nashville-Davidson area), with the most non-concentric urban area of all counties studied, historically had grass-roots support for farmland conservation even under intense pressure to develop.
Visalia, in Tulare County, California, has achieved one of the most non-concentric urban areas in the U.S., even though the Visalia General Plan calls for the county to "manage planning area growth to be contiguous and concentric from the city's core area."
Brinkley maintains that building cities that interweave farms and greenways could accommodate more population growth, with high density housing and office space on public transit routes. This would put higher density development near the desirable urban edge where housing can offer a premium.

Farmland can also be better integrated, she said.

"Developers are now building housing around farmlands the way we used to build around golf courses," she said. Farms closer to cities generate more profit per acre because they have greater opportunities for direct marketing sales to their neighbors, she added.

Brinkley sees her research as extending the concept of "mixed-use" development from the neighborhood to a regional scale. There is also evidence that interweaving urban use and farmlands could help decrease the urban heat island effect and improve stormwater runoff management, Brinkley said. A heat island refers to a metropolitan area that is significantly warmer than its surrounding rural areas due to human activities and lack of vegetation.

"In sum," she says in her article, "these findings push the boundaries of modern planning to reconsider the periphery as important in shaping total landscape development."