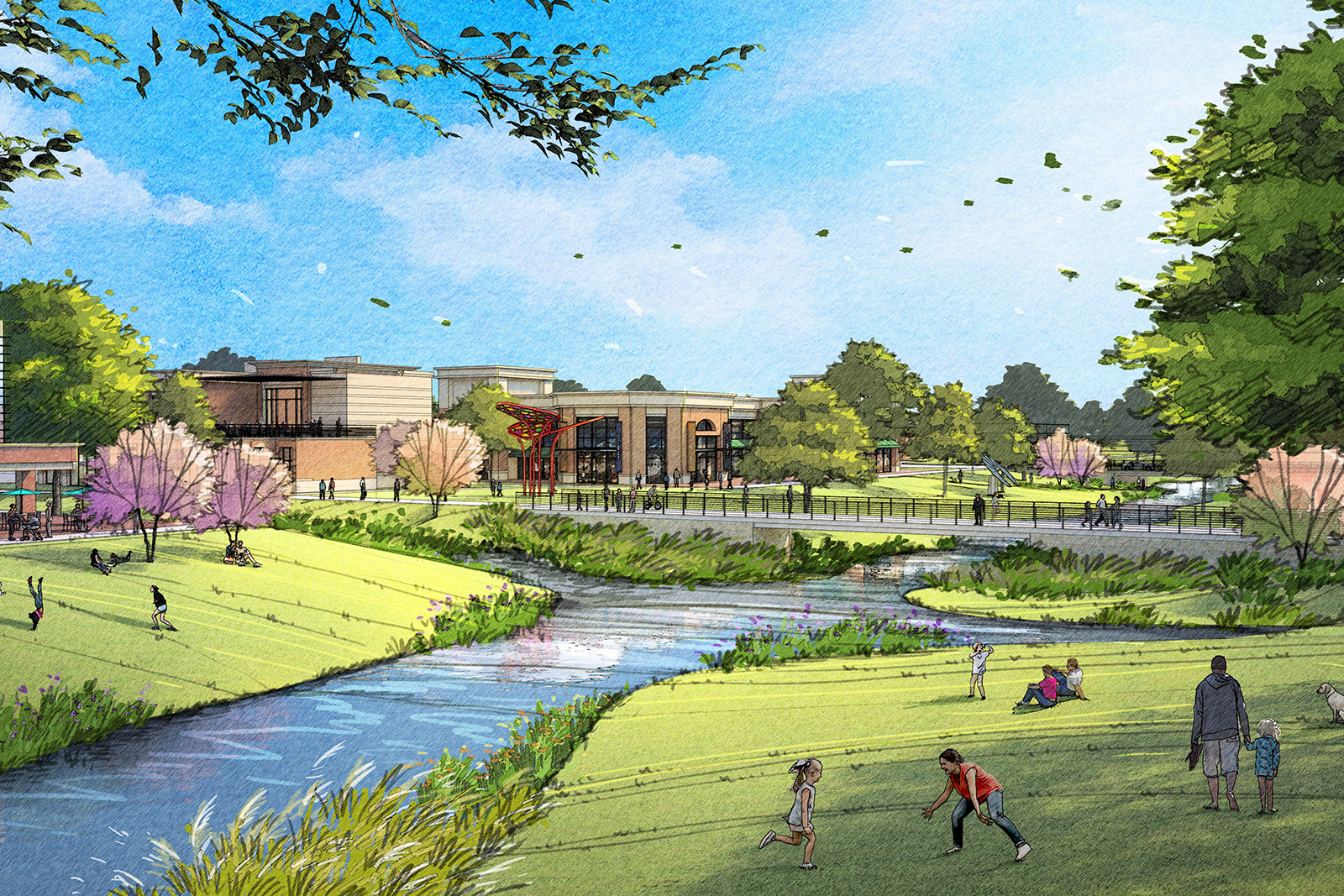 EHRA Engineering’s Planning and Visioning Team recently completed a study for the City of Baytown on 465-acres along San Jacinto Boulevard. In 2019, the City completed an extension of San Jacinto Boulevard from Interstate 10 to West Cedar Bayou Lynchburg Road, including a traffic circle intersection with Hunt Road, which connects Garth Road to John Martin Road. This road infrastructure poised the area for new development, but a vision for what such development can be was needed. EHRA’s Team of Planners, Hydrologists and Landscape Architects saw an opportunity to create a new Baytown “front door” where land uses and building types not previously seen in the city would introduce a dynamic destination and place where business, recreation and living would coexist. “This was a really fun project to work on because we were given the freedom to think wholistically about a large area,” said Brad Sweitzer, Senior Planner for EHRA.

At the forefront of the concept is a Low Impact Development (LID) stormwater drainage system which becomes a focal point for recreation and transportation rather than an unattractive series of ditches. By widening existing drainage facilities, creating detention lakes and shallow swales, stormwater can be managed within attractive greenbelts. Multi-modal transportation spines are proposed to weave throughout the study area including several wide shared-use paths that crisscross the site. These paths will allow interaction with small ponds and engineered streams, as well as a large lake feature. Each of the drainage concepts can influence different interactions such as lakefront concerts, stream-side dining and retail, or greenbelt walking and jogging paths.

Proposed as a mixed-use community, the San Jacinto Boulevard District plan includes higher density development in closer proximity to I-10 and gradually decreases in density toward the south end of the study area. Multi-story retail, commercial and office buildings are proposed north of Hunt Road including hotels, a hospital and multi-story residential atop ground floor retail. South of Hunt Road, the density decreases to proposed commercial sites like a specialty grocer and apartments or assisted living. Even further south, townhomes and single family residential would add homesites in proximity to the vibrancy of the upper part of the district.

All of the land uses are connected by the greenbelt pathways while San Jacinto Boulevard itself provides vehicular connectivity. Within the northern part of the district, the boulevard is proposed to be transformed into a walkable mixed-use center with adjacent parallel parking and augmented landscaping. Combined with shallow building setbacks and wide sidewalks, San Jacinto Boulevard becomes a destination street. Public art adds to the character of the streets and pathways. Using Baytown’s industrial history as inspiration, decommissioned artifacts can be painted and lit at night to dramatic effect. A large, vertical art element is proposed to be the centerpiece for the entire district located at the northern end of the primary greenspace. This would serve as a visual draw from I-10 and can be a canvas for nighttime lighting.

As proposed, the San Jacinto Boulevard District study creates a guide for the City of Baytown to market itself to new investments in commercial space, retail and hospitality. The project continues today as EHRA studies the first phase of drainage improvements to facilitate new development. “The end product is greatly enhanced when our team is able to create a vision for a project from the very beginning like we did on this one,” said Brad. “We are certainly eager to see how this part of Baytown develops in the future.”

Learn more by checking out our Project Profile Here