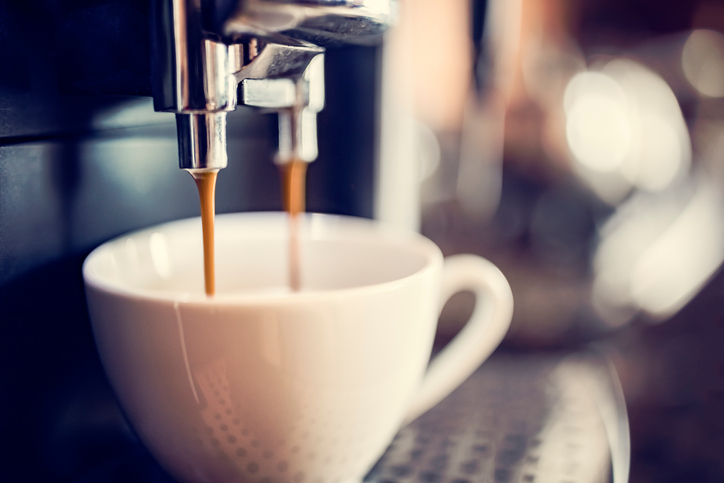 Americans drink an average of 3.1 cups of coffee per day; for many people, the popular beverage is a morning necessity, and I bet during this cold snap, that we are all drinking more hot liquids no matter the time of day! When carrying a liquid, common sense says to walk slowly and refrain from overfilling the container. But when commuters rush out the door with coffee in hand, chances are their hastiness causes some of the hot liquid to slosh out of the cup. The resulting spills, messes, and mild burns undoubtedly counteract coffee's savory benefits.

Sloshing occurs when a vessel of liquid -- coffee in a mug, water in a bucket, liquid natural gas in a tanker, etc. -- oscillates horizontally around a fixed position near a resonant frequency; this motion occurs when the containers are carried or moved. While nearly all transport containers have rigid handles, a bucket with a pivoted handle allows rotation around a central axis and greatly reduces the chances of spilling. Although this is not necessarily a realistic on-the-go solution for most beverages, the mitigation or elimination of sloshing is certainly desirable. In a recent article published in SIAM Review, Hilary and John Ockendon use surprisingly simple mathematics to develop a model for sloshing. Their model comprises a mug on a smooth horizontal table that oscillates in a single direction via a spring connection. "We chose the mathematically simplest model with which to understand the basic mechanics of pendulum action on sloshing problems," J. Ockendon said.

The authors derive their inspiration from an Ig Nobel prize-winning paper describing a basic mechanical model that investigates the results of walking backwards while carrying a cup of coffee. They use both Newton's laws of physics and the basic properties of hydrodynamics to employ a so-called "paradigm" configuration, which explains how a cradle introduces an extra degree of freedom that in turn modifies the liquid's response. "The paradigm model contains the same mechanics as the pendulum but is simpler to write down," Ockendon said. "We found some experimental results on the paradigm model, which meant we could make some direct comparisons."

The authors evaluate this scenario rather than the more realistic but complicated use of a mug as a cradle that moves like a simple pendulum. To further simplify their model, they assume that the mug in question is rectangular and engaged in two-dimensional motion, i.e., motion perpendicular to the direction of the spring's action is absent. Because the coffee is initially at rest, the flow is always irrotational. "Our model considers sloshing in a tank suspended from a pivot that oscillates horizontally at a frequency close to the lowest sloshing frequency of the liquid in the tank," Ockendon said. "Together we have written several papers on classical sloshing over the last 40 years, but only recently were we stimulated by these observations to consider the pendulum effect."

Variables in the initial model represent (i) a hand moving around a fixed position, (ii) the frequency of walking, typically between 1-2 Hertz, and (iii) a spring connecting the shaking hand to the mug, which slides on the table's smooth surface. Ockendon and Ockendon are most interested in the spring's effect on the motion of the liquid.

The authors solve the model's equations via separation of variables and analyze the subsequent result with a response diagram depicting the sloshing amplitude's dependence on forcing frequency. The mug's boundary conditions assume that the normal velocity of both the liquid and the mug are the same, and that the oscillation's amplitude is small. Ockendon and Ockendon linearize the boundary conditions to avoid solving a nonlinear free boundary problem with no explicit solution. They record the equation of motion for the container to couple the motion of the liquid and the spring. In this case, the spring's tension and the pressure on the walls of the container are the acting horizontal forces.

The authors discover that including a string or a pendulum between the container and the carrying hand (the forcing mechanism) lessens the rigidity and dramatically decreases the lowest resonant frequency, thus diminishing sloshing for almost all frequencies. "Our model shows that, compared to an unpivoted tank, the amplitude of the lowest resonant response will be significantly reduced, provided the length of the pendulum is greater than the length of the tank," Ockendon said.

In conclusion, Ockendon and Ockendon use simplistic modeling and analysis to explain a common phenomenon that nearly everybody experiences. They suggest that future analysts investigate sloshing in a cylindrical rather than rectangular mug, or with vertical rather than horizontal oscillations, as both of these factors complicate the model. One could also examine the spring action's effect on the system's nonlinear behavior near resonance. Ultimately, researchers can employ basic ideas from this study to consider the nonlinear response of shallow water sloshing, which has a variety of real-world applications.

Next time you spill your coffee, know that it's more complicated than you once thought, and to avoid complicated math, you may simply want to just use a lid!